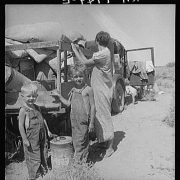 Are you a prepper? Have you thought about prepping? I do, but not exactly in the way you may think.

Everyone should be prepared for hard times, because hard times do inevitably come. Whether it’s economic collapse, war, natural disaster, energy decent, or ecological collapse, hard times have happened, and they are guaranteed to happen again. Part of an impoverished family of nine on a New Mexico highway. Depression refugees from Iowa.   Photographer: Dorothea Lange.
http://www.english.illinois.edu/maps/depression/photoessay.htm

No president, despite his or her promises, can guarantee that the economy will keep growing. That is not logical or feasible. The free-market economy runs on a cycle. Sometimes it dips too low. War will probably never end, and I suspect no country outside of Canada will ever be war-free forever. Natural disasters are simply a fact of life, and in some places they have been occurring with greater frequency and force. Fossil fuels provide the unmatchable energy density that sustains our current lifestyles, but they were made millions of years ago, and only a finite quantity exists on this planet. We will use up all the available fossil fuels eventually. The reasons are endless, but one thing is for sure, whatever the reason, hard times will come.

When most people think of prepping, they think of the kinds of things sensationalized on the TV show Doomsday Preppers. Most of the featured preppers on this show focus on hoarding supplies. They store lots of food, water, and ammunition for things like hunting and protection — protection from the inevitable hordes of people who will come for their stash.

All preppers are wise to try to store enough of these items to get them through the hard times, but relying on storage alone leaves you empty-handed. For example, is it really possible to store enough ammunition to protect your supplies and family with 319 million people in this country? What if the disaster is energy decent or ecological collapse? Things won’t get “better” for a long time — not until people learn to transition to a lifestyle that can be sustained by the resources at hand. It could be years before some sort of new operable normal returns. Most of us don’t have enough space or funds to accumulate the kind of resources to last that long.

Now don’t get me wrong, having backup storage of food, water, and other supplies is smart and recommended. FEMA suggests storing two weeks’ worth of food and water, the CDC recommends 3 days. Many people store months’ or even years’ worth of food and water. It’s also wise to consider a gravity-fed water filter, and the many supplies you’ll need to survive including fire-making tools, a place to make a fire, clothing, tools and weapons, first aid, etc. It’s also important to learn survival skills including fire making, hunting and fishing, plant knowledge, self-defense, and herbal medicine. But there’s even more we can do. For city dwellers, public food forests are a great way to prepare the entire community for disaster.

Once established, food forests are resilient and self-sufficient just like nature, because they are designed to mimic nature. They are not tilled and replanted every year. They don’t need to be incessantly weeded and watered. Once they begin to mature, they would not only survive, but continue to produce food even with complete human neglect, which is a good thing, because in the case of a disaster we might not have a lot of time to tend to a garden in the midst of initial chaos.

Best of all, we can use what it provides now, as soon as it starts producing. Storing food is good, but it’s meant to be unused until we need it. It expires at some point. It doesn’t multiply. A food forest continues to produce more food each year (as long as we actively renew it as it begins to age). We can use that food every year and store some of it, and then more food comes the next year. At the same time it’s filtering pollutants, cleaning our air, feeding and sheltering wildlife, producing fuel and medicine, and creating seeds and clones that we can use for even more multiplication of these benefits. It multiplies exponentially. Food forests will also feed wildlife, which we can hunt. A landscape devoid of plants is a landscape devoid of animals. We can’t eat concrete, and we can’t eat manicured lawns. We can’t even go outside of city limits and eat what’s growing in the fields – which are varieties of corn and beans meant to be used as livestock feed. But we can eat many plants and animals that could be found right here in the city if we plant them. We can eat lots of insects too, but that’s for another blog post.

The bottom line is if you agree that hard times will come back around and that we should prepare for those times, then join Project Food Forest in preparing the city in a more sustainable prepping venture. Help us plant public food forests around the city of Sioux Falls. Donate or contact us today! 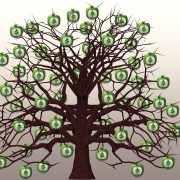 Money Doesn’t Grow on Trees, But Almost Everything We Need Does
Put Down That Rake!

5 Reasons to have Backyard Chickens
Scroll to top